Join Our Newsletter
Shop Our Store
MAIN MENUMAIN MENU
By Craig Martin on May 19, 2017 in Uncategorized 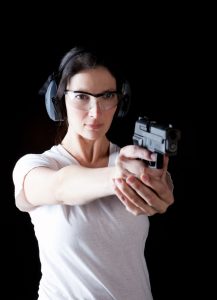 Top Gun Shooting Sports Range, a shooting range based in Taylor, MI is gearing up for an event that has quickly become one of their biggest days of the year. One day per year, they offer free training to the highest growing segment of the concealed carry population, women.

This is the sixth year of this program and according to Detroit firearm instructor Rick Ector it could be their biggest yet. Ector said that the program has grown immensely since the first year he offered the training when about 50 women showed up. Last year there were 400 women involved, and could be as many as 600 this year, according to Ector.

“Six years ago, I saw a story about a woman whose body was discarded, and I thought ‘someone should do something.’ Then I thought, ‘why don’t I do it?’”

This was the quote that Ector gave when asked by “The Detroit News” about his reasoning behind putting on this event.

Ector also added that, “You’re seeing more and more women arming themselves. If giving women a free lesson by a credentialed professional translates into women just trying it, it’ll be a productive use of my time.”

The training that Top Gun is offering will show women necessary gun safety, how to load a pistol, and will include a live fire section in which the ladies will fire 21 rounds before the end of the day.

Top Gun’s event is going on on May 21, at Top Gun Shooting Sports Range at 22050 Pennsylvania Rd. in Taylor.

For more information on the event, you can check out Top Gun’s Facebook event page for the shooting event.

And for any ladies looking to attend a class or are otherwise interested in the concealed carry lifestyle, make sure you have a proper holster to carry your gun in, like this one from “Lethal Lace.” It is a holster designed specifically for women who wish to carry every day and still stick to their feminine fashion.

Craig Martin grew up in the unincorporated town of Lewis, Wisconsin. From a young age, Craig was introduced to guns, as he was tasked with defending his backwood home’s wiring from a scourge of red squirrels. Ever the animal lover, though; Craig couldn’t let these creatures die needlessly. So he would take his kills and leave them for the foxes, coyotes, and bears to eat at a deer feeder his grandfather built around their home. His lifestyle made Craig understand that guns are a tool and ever since, has spread the word about how firearms are not a menace, like the red squirrel, but an item to help people. He instils this in every article he writes for USA Firearm Training.
View all posts by Craig Martin →