Join Our Newsletter
Shop Our Store
MAIN MENUMAIN MENU
By Craig Martin on June 5, 2017 in News 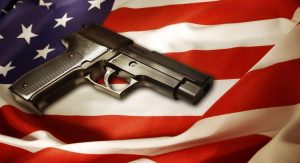 This has definitely been a busy year for Constitutional Carry in the United States. Following the Republican trifecta gained by the federal government in November as well as 25 full Republican-controlled state governments, many lawmakers see the time as being perfect to push through pro-gun legislation in the state houses.

This is exactly what Michigan has in mind, as well with House bills 4416, 4417, 4418, and 4419. Combined, these bills create what would be a first for the state, full Constitutional Carry.

Michigan has a complicated set-up for what is and isn’t legal with regards to carry. Open carry without a license is legal (except in areas where firearms are prohibited), but concealed carry without a permit is illegal. If you are openly carrying while in your car, that is considered concealed carry according to current state law. State Representative Michelle Hoitenga, one of the sponsors of these bills has made it apparent that it is regulations like this that are problematic and need to be done away with.

“It only becomes illegal when someone puts on a coat, because the gun then becomes concealed,” Hoitenga said. “One millimeter of clothing makes a difference between a criminal act and a legal act. My question is, why are law abiding citizens paying expensive fees for courses and permits to exercise their constitutional right to bear arms?”

However, there is currently resistance to the bills and not just from the typical anti-gunners out there. The Fraternal Order of Police for Michigan also has an issue with Constitutional Carry, claiming that the current 8 hours of safety classes in order to procure a concealed carry permit are necessary for Michiganders and the safety of the general populace.

These arguments and likely many more are destined to roll on as the bill begins its movement through the State House and, perhaps some day, to Governor Snyder’s desk.

What do you think? Should Constitutional Carry be fully allowed in Michigan or should concealed carry classes still remain a necessary part of gun ownership in the state? Let us know in the comments below.

Craig Martin grew up in the unincorporated town of Lewis, Wisconsin. From a young age, Craig was introduced to guns, as he was tasked with defending his backwood home’s wiring from a scourge of red squirrels. Ever the animal lover, though; Craig couldn’t let these creatures die needlessly. So he would take his kills and leave them for the foxes, coyotes, and bears to eat at a deer feeder his grandfather built around their home. His lifestyle made Craig understand that guns are a tool and ever since, has spread the word about how firearms are not a menace, like the red squirrel, but an item to help people. He instils this in every article he writes for USA Firearm Training.
View all posts by Craig Martin →