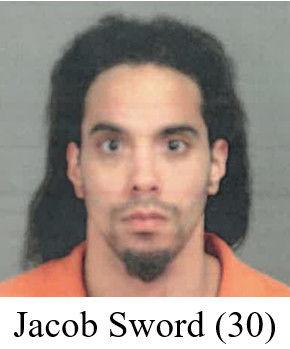 Flint, Michigan – A man was shot after he robbed an elementary schoolteacher, then broke into a nearby home.

According to Flint Police Department, officers were dispatched to a residence where the 911 caller told dispatchers they had shot someone trying to break in and were holding the invader at gun point in the home.

When police arrived at the scene located in the 1000 block of Garden St., they discovered 30-year-old Jacob Sword being held by homeowners armed with a firearm. The victims said they heard someone trying to break into their home, then discovered the suspect attempting to force his way in through the back door with a knife in his hand.

The same knife law enforcement officials say Sword used to rob a schoolteacher at Eisenhower Elementary a short time before, after students had already gone home for the day.

Sword sustained non-life-threatening injuries from being shot by the homeowners and was taken to the hospital for treatment. He was then arrested on charges of armed robbery, 1st degree home invasion, and assaulting, resisting, and obstructing police.

Ambushes at the doors of your home are a common method employed by criminals. Knowing what to look for, and how to respond to a threat launched by a criminal can mean the difference in a home invasion. Being armed isn’t the only preparation that should be taken for home defense. Good home defense is trained for, planned, and prepared for.

Read here for the latest tactics and techniques for home defense with the Complete Home Defense – Tactics for Defending Your Castle. This training offers a broad overview of the topic. But if you would like to know more about door ambushes like in the scenario above, read here for Door Ambush for how to properly guard against attacks from the entrance of you home.

A family safety plan that is well discussed and rehearsed can help everyone make it out of a dangerous situation. A monthly meeting that discusses topics like home defense, fire, and medical can make a huge difference and the regular talk keeps the plan in mind.